So this is how it all started...
BUTCHIE'S BRAS & GIRDLES and a cool mission of the company... „United we stand, divided we fall !“ (Don't we all ?! :)) „Since 1956“ means that the certain person was born in 1956 and here is the question for everyone – what does B.S.Kotkin mean ? Please send your answers ! If you guess – you might be rewarded :)

The cool BUTHCHIE'S sign
Just next to the entrance to the Secret Warehouse. Let's open it up and go in ! 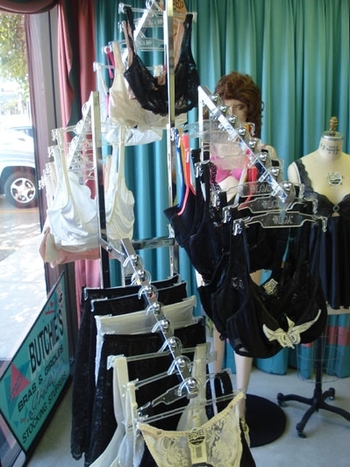 Some of the BUTCHIE'S merchandise
Now if there wasn't for the sad events regarding certain legal problems that occurRed in 2007, I would make jokes about the merchandise, but due to respect to the owner, B.S.Kotkin, I will not do so. Chris Kenner, the tour guide
... (and much more:)) wishing a very warm welcome. In the mirror (left to Chris) you can see Doris Roach, the wife of Les Cooper who got in trouble at the Warehouse (what you will witness later). The entrance is right behind Chris – the cabin that is actually used to try the Butchie's merchandise on. Now, first time I was here (in 2002) they had a doll in that cabin and you would have to press here left boob to open the secret passage, which I thought it was cool. For some reason they do not have it anymore.

The lobby...
The Master Himself awaits us... well not in three but in two dimensions :) Awards
Some of the awards including the stamps in 5 countries (on the left), the Bambi award (German Oscar) and the Knighthood of the French Government (on the right)

Guinness World Record certificate
As you will see later, DC holds the most of the Guinness records held by an artist. The Hollywood Walk of Fame certificate
The actual star you will see later.

The stamps
The stamps of five countries that have honoured DC 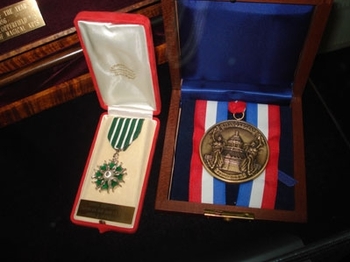 Once again – The French Government Knighthood (on the left). On the right is „The Living Legend“ award given by the US Library of Congress. My personal opinion is that they should consider the change of the title. Can anybody actually be a living legend ???

This is how the hard work and love to the art of magic pay out. Amazing !

Check this out!
Awards, awards and... more awards ! Chris is showing us some of the newspaper clipping... ...while Les Cooper is trying to pick up a married chick

Chris: „I don't understand why you always have to run after married chicks. You will get us all in trouble.“ Les :“ OK. I know – I am kind of addicted to it. Sorry. Won't happen again. What can I do... Sorry.“

Chris: „Take a look at those two, for example – they are not married – just pick one of those, dude !“ Les:“Yeah, you are right ! They look even better that the married one!“

Chris: „See, Les, Goran, for example is a nice guy. He is not chasing chicks and not touching any of the props. That is why I am going to take a picture with him!“
M.G.Taylor (thinking): „Yeah, right... you wish...good luck :) !“ M.G.Taylor (saying): „Could you also sign the cover of the Magic magazine for me, please?“ Chris: „Sure!“ 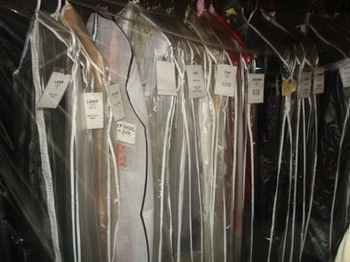 Some of the costumes nicely stored... ...and some of the props packed in cases. Let's unpack them ! ONE
The brilliant illusion that has opened the Tornado of Fire TV special.
On the platform you can see the dummies that were actually used for the testing of the tornado
(the Jay Leno dummy is not there:)). Up right you can see a part of the moon that was used in the background of the Brasilian water levitation. The Crystal Box
... that was used in the Great Wall of China opening. As you can see
I am not touching anything...

The Table of Death
You know the drill – amazing illusion. Like Fires of Passion upside-down :) I am not touching anything... yet :) The door of the safe
From the imploding building (The Explosive Encounter TV Special). The story behind that door is that DC thought the safe was lost for good under the destroyed building. One day someone called and said that they might have something he would be interested in :) Oh, I am not touching it – just checking weather it is real steel. S--- , it is – I have to change my theory about that escape :) THE FAN
This is one of my favourites – THE FAN – does sitting on it count as touching the prop ? :)

THE DEATH SAW
I just had to examine this one. One of my favourite DC illusions :) Spikes from Fires of Passion
Yep – they are real !

THE ELEVATOR
Again – one of my favourites – THE ELEVATOR – sitting and touching at the same time. Feeling almost like appearing in it actually :) So basically
It is the perfect playground for a magician :) Amazing !

Homer Liwag
Homer Liwag came just in time for a picture ! He is great !

In front of the Secret Warehouse is a replica of the star featured at the Walk of Fame in Hollywood...

...and trailers parked and ready to load-in for the tour...

...in the background you can see the Mandaly Bay tower and the Luxor pyramid. The front corner of the Secret Warehouse

Before I say goodbye for the second time. It was a blast – as always. Thanks to everyone, especially to David for having us there and to Chris for making the most memorable tour ever !