HERE IS ONE FREE CARD-TRICK! 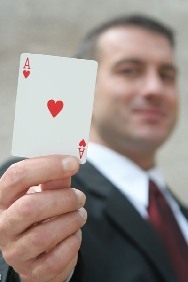 A spectator is asked to memorize one card and show you only the column in which the card is. After he has done that, make three piles of cards out of three columns (1 column = 1 pile) and put the pile with the spectator's card between other two piles. This should look like you are casually making a pile of 21 cards again. Form three columns again - using the same principle - putting the first card on the left, the second card in the middle, the third card on the right, the fourth card under the first card, the fifth card under the second card, etc.

Again - the spectator is asked to point the column where his card is. That column/pile is put between the other two. Please speak while doing this! Tell jokes, sing (if you can), try to seduce the spectator (if you like her/him) or just act like if you were in trance (hehehe).

Repeating this for three times has automatically brought the selected card to the 11th position in the pile of 21 cards. That would mean - the selected card is exactly in the middle of the deck. (I don't know how it happens - but it works!)

Now - You could concentrate for a moment, look at the cards, take the spectator's card (the 11th card in the deck) and take a bow. But this is not good enough for YOU, THE MASTERMAGICIAN! This will look much, much better:

When You asked the spectator to help You, You have certainly asked what his name was. If you are performing in front of Your friends and/or family - You will know that. If You are performing at a party, this would be the perfect moment to find out who that beautiful lady is! Anyway…You want to turn the selected card as the final card, by spelling the name of the spectator, putting one card down for each letter in spectator's name. In order to do that, you have to bring a number of cards from the top of the pile to the bottom. That number equals 11 minus number of letters in the name of the spectator. Since You know the name of the spectator, try to do this calculation before you piled the cards for the third time. So, when you are piling the cards for the third and last time, hold the number of cards that should move from the top to the bottom separated with your little finger. Ask the spectator again "What was Your name?" or "How do you spell Your name?", looking straight in his/her eyes. This is the perfect time to bring the wanted number of cards from top to the bottom of the deck. The action (for those who may eventually see it) should look as if you were randomly cutting the cards. Now, put one card down for every letter in the spectator's name. The selected card will be turned at the end - the last letter in spectator's name.

For example: If the spectator's name is John, You must bring 11 - 4 = 7 cards from the top to the bottom of the deck. Now is the selected card the 4th card in the deck. If You spell his name now, putting one card at the table for every letter in the name, You will automatically be able to turn the selected card on "N", spelling J-O-H-N.