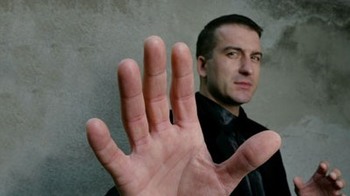 "...M.G.Taylor is being called "Croatian Copperfield"."

"M.G.Taylor has erased the border between illusion and reality. Only insiders could have imagined where the magic ends and the high-tech begins."
Opening of CARNET - Croatian Academic and Research Network

"The greatest Croatian master-magician has recently fascinated the visitors of the "Car-Fair" in Zagreb. In front of live audience, he has vanished a car - the new model of Opel Vectra."

"M.G.Taylor became a bachelor of science in electrical engineering. For his final exam "Acoustic illusions", he did a research of some unexplained acoustic phenomenon."

"M.G.Taylor is the greatest Croatian illusionist of all times. This is the opinion of audiences and critics, as well."

"M.G.Taylor is the first artist who has established the standards of the contemporary art of magic in Croatia. With his work, he is supporting and constantly developing the art of magic. Positively influencing and significantly contributing to the development of children's creativity."
EMIL ROBERT TANAY
member of the Croatian Society of Artists
member of INSEA, the international organisation for education through art
professor at the Academy of fine arts, in Zagreb
president of the Croatian Society of fine arts counsellors

"The international success and performances of M.G.Taylor are very important for the presentation and promotion of the city of Zagreb and the Republic of Croatia."
Tourist Community of Zagreb